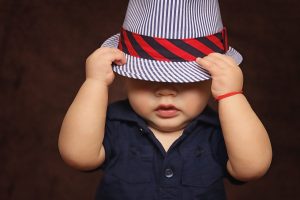 What I meant by “blind point” here is: at situations some people who cannot see obvious happenings around them when they are focusing on something else which is more closely related to themselves.

For instance, moms don’t see someone else’s kids who are in need of assisting/helping around them whilst at the same time they are taking very good care of their own kids at the same spot.

The incident I experienced was:

Anton and I went to a friend’s home for his one year’s birthday.

A guest mom joined Anton and I with her one and half month older daughter in a play corner: the little girl was playing on the ground in front of her, and we moms chatted a little bit as moms always do.

Anton and I had to leave earlier as we planned. he was still focusing on a piece of toy, and there were two other kids, with three other parents, the same mom who I briefly chatted with and one couple: I thought it was okay that I just quickly go to washroom myself for less than 2 minutes, so I did.

I thought I heard Anton in the bathroom, then I quickly went out, I saw Anton was already moved to the shelf which was specially placed there for baby/kid guests.

Then I saw something I couldn’t believe my eyes: The mom took her daughter away from where the girl and Anton were and shifted about 30 degrees to chat with the couple, whilst Anton was falling on the ground. Anton fell on the ground, and he was lying on the ground with his head very much close to the wheels of the walker which the third girl was pushing, then he started to cry.

The three parents were chatting there. I ran from the bathroom door to Anton, quickly picked him up in my arms, checked and confirmed that his head was not hurt.

I said nothing but turned to the side and continued to dress for heading off.

I once heard a story from a friend, before Anton was born. At my friend’s working place, there was a boy who was crying in one corner, and just next to the kid there was a mom who was taking care of her own daughter. My friend talked with the crying boy, gave him water, calmed him down until that boy’s father came back.

My friend’s comment at the end of that story was, she was very much surprised that mom who was taking care of her own daughter, who seemed didn’t see the fact that there was a boy who was crying next to them. At that time I just thought it was strange.